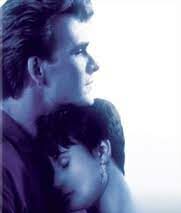 Let’s breakdown the movie Ghost with Save the Cat

You must learn the Basics of Story Structure

How to Plot and Develop Your Screenplay, Novel, and TV Series with the #1 Storytelling Guide

Click here to Watch Blake Snyder’s Save the Cat

The key here is a nemesis and problem that is seemingly bigger than they are.

Logline: A murdered man’s ghost must find a way to warn the woman he loves that she is in danger… before she becomes a murder victim as well.

clouds of moving dust. Muted light pierce the dense atmosphere. An eeriness envelops us. Strange ghostly forms appear and disappear in the distance. Broken timbers and dangling cables emerge from the smoky light. We see hints of a vast demolished space. An old white plaster wall.

Molly comments about “the space” Sam asks, “what will we do with the space?” (when we leave space in our heart – we love – love never dies)

Sam Wheat and Molly Jenson are a couple in love. Well – in love- without Sam saying the words “I love you,” preferring to respond to Molly’s statement with a “ditto.” Together, and with the help of Sam’s business partner, Carl, they are renovating a loft. Unfortunately, Sam is preoccupied with a financial conundrum. Which affects him both at work and at home. Soon after delving into the finances, Sam is murdered and becomes a ghost. This effectively destroys his initial Normal World.

Should Sam head towards the light – heaven, or should he stay as a ghost with Molly?

Sam is worried that Willie Lopez is going to murder Molly.

Sam finds himself in a new world – the world of a ghost.

Sam must learn the rules and how to adapt to the new world. He is mentored by an Emergency Room Ghost, who introduces him to the new world’s in’s and out’s. Sam meets the psychic Oda Mae and realizes she can hear him. Launching a series of reactions from Sam and Oda Mae as they try to negotiate their new relationship —and Sam’s need to protect Molly.

From a loud-mouthed New York City subway poltergeist (Vincent Schiavelli), Sam learns the skills needed to move objects using only his mental powers. Sam convinces Oda Mae to end Carl’s money laundering scheme by impersonating Carl’s fake bank account owner. She withdraws the balance and closes the account with an invisible Sam behind her, donating the money to a homeless shelter.

Molly goes to the police and asks about Ode Mae. She is told over and over. Oda Mae is a con (wo)man trying to cheat Molly. There is no such thing as a psychic. That Molly is not communicating with Sam. Afterward, Sam and Oda Mae return to Molly’s apartment to warn about Carl. Molly refuses to open the door – and is lost in her grief.

When Oda Mae learns the name of Sam’s killer., she is afraid and refuses to help Sam.

Sam discovers the man behind his murder –  his best friend, Carl.

Sam enters the apartment. He instructs Oda Mae to push a penny under the front door. In front of Molly, Sam lifts the penny into the air.

A shocked Molly realizes the truth and lets Ode Mae inside.

After Ode Mae calls the police, she allows Sam to possess her body, permitting him and Molly to share a dance. For the last time.

After evading Carl for a brief time, Carl seizes Oda Mae. At gunpoint. He threatens her, demanding the money. Molly comes to Oda Mae’s rescue. She is pushed aside. As a recovered Sam arrives to help. CArl throws a scaffolding hook in Sam’s direction, which swings back and shatters the window, which Carl was attempting to escape. Impaling him through the chest.

Carl morphs into a ghost, astonishing and paining Sam. Sam watches in silence as the shadowy demons arrive and drag a screaming Carl away into the darkness.

As Sam returns, Molly suddenly realizes that she can hear him.

A heavenly light fills the room, making Sam fully visible to Molly and Oda Mae. Sam turns and sees hundreds of people standing behind him, waiting for him. Finally, Sam realizes his task is complete. It is time to move on.

Sam thanks Oda Mae for her help, then Sam professes both his everlasting love and his goodbyes to Molly.